Letters in Sanskrit are believed to be loaded with mystic power that are yielded when pronounced correctly.

Vowels are pronounced by a smooth flow of air thro' the mouth. Sanskrit language has 13 vowels as shown below


Traditionally there are two more vowels:

Vowels can be classified further as simple and diphthong vowels. A simple vowels is also called a monophthong. The vowel has the same sound at the beginning and end. Simple vowels can be long or short. The difference is in the length of duration of pronunciation. Long vowels are pronounced twice as long as the short vowels.

A diphthong is formed by the combination of two vowels in a single syllable, in which the sound begins as one vowel and glides smoothly towards the second. In Sanskrit all diphthongs are long vowels.

These consonants are pronounced by the complete closure of the various mouth organs. In fact, they are further categorized into several groups based on the mouth organ used for pronunciation.

Like the vowels, these letters are pronounced by the smooth flow of air. However, like the consonants the sounds are made by stopping the air flow at the beginning of pronunciation. Hence, they are called "semi-vowels".
The semi-vowels have a special significance in Sanskrit. The Bija (seed) mantras are formed by these letters. Several Yoga breathing exercises use these letters as well.
There are five semi-vowels as shown below -

Aspirate and the Sibilants (ऊष्मन्)

Sibilants make the hissing "s" sound. The sound is made by focussing the air intensely through a narrow channel. There are three sibilants in Sanskrit. The Aspirate is the sound made from the throat

In Sanskrit, when vowels combine with consonants, the vowels are represented by special symbols. Vowels are generally represented by the same symbol irrespective of the consonant they combine with.
A combination of a consonant and a vowel yields a single syllable. Every syllable has one or two mātras (मात्र). Mātra is a unit of length in pronunciation. In other words, the length of a syllable is measured by a mātra. Short vowels and consonant combinations with short vowels have one mātra. Long vowels and consonant combinations with long vowels have two mātras.

ka with all the mātras 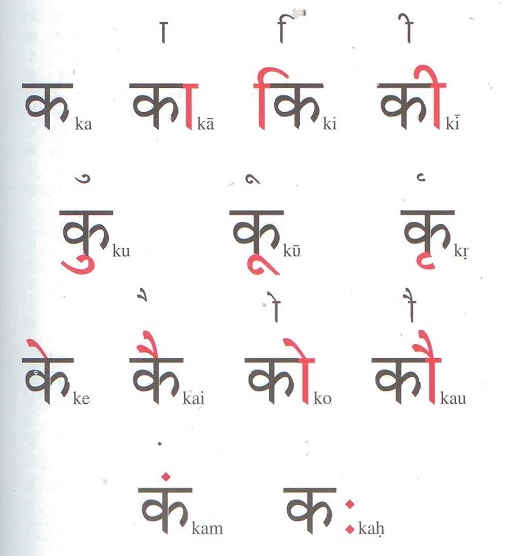 In Sanskrit there are special rules when blending two consonants. The rules are as follows: